Many Physicians and Physiotherapists talk about the benefits of combining aerosol medication like Ventolin with pressure support ventilation, PEP and OPEP device. The outcomes of the following 5 medical studies and helpful information is truly surprising.

Since finding these studies a month ago, AirPhysio has talked to a number of physicians. These physicians has a similar understanding as the physicians who started 4 of these studies. They started these studies to test their theory that PEP and OPEP devices should be used before the use of a reliever, believing that the PEP and OPEP devices would help clear the mucus and this would result in better distribution and effectiveness of the aerosol medication. So when the results were correlated, they were surprised by what they found.

Before I go into these studies, I first need to explain the properties of PEP and OPEP devices. As a part of the PEP or positive expiratory pressure therapy, when you blow into the devices, they have 2 major properties:

In the 1st study [1], 2 doctors started their study with 54 bronchial asthmatics in 2001 found the following:

This went against what they initially believed and they put this down to the mucus clearance properties of the PEP device.

Their findings correlated those in the 1st study mentioned above and they found that in both groups using PEP therapy in conjuction with the delivery of the aerosol medication showed a higher distribution and effectiveness over either of the gases by themselves aerosol medication when used alone.

They put this down to the fact that PEP prevents airway collapse during expiration, decreasing resistance when breathing out, and showed a significant increase in how much air can be blown out in 1 second (FEV1) was observed in the Heliox + PEP group, which did not occur in other groups.

The 3rd and 4th studies:

The 3rd and 4th studies [3,4], used an adrenaline based aerosol reliever called Terbutaline and their findings correlated those of the first 2 studies with 1 minor difference. In the 4th study, it was found that  when using Terbutaline with a PEP device, on lower doses the combination of PEP with or without Terbutaline had an influence on airway resistance and FRC, but once the dosage of Terbutaline reached a certain level, there was no significant difference to the effect of the PEP device.

The 3rd study had the same conclusions as the 1st and 2nd study otherwise.

The 5th study was the most interesting as it showed a visible difference in distribution and effectiveness of aerosol medication from a nebulizer with 18 children diagnosed with cystic fibrosis. As shown to the right on the top 2 images A and B. 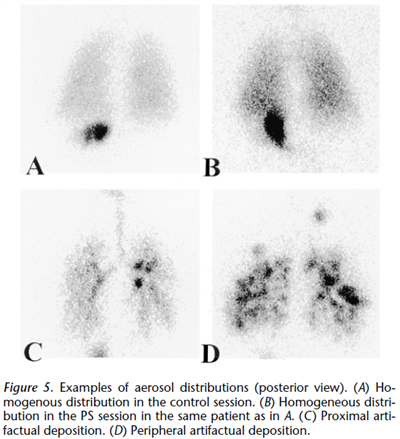 The study used a process called pressure support ventilation which is purely about keeping the airways open and has no mucus clearance properties. They used a nebulizer with a tiny amount of radioactive particles and then used a perfusion scan to see what effects the distribution and absorption was with and without pressure support.

Pressure support is similar to the lung expansion properties of PEP and OPEP devices and this further supports the findings of the 4 studies above and in particular the 2nd studies point that PEP prevents airway collapse during expiration, decreasing resistance when breathing out.

Some other very interesting findings as follows:

The best way to use PEP and OPEP devices in conjunction with aerosol medication are as follows:

It is the lung expansion properties of PEP and OPEP devices which assists in the improved distribution and effectiveness, not the mucus clearance properties which have the most effect.

For the individual studies and medical summaries, please visit -https://www.airphysio.com/NaturallyBetterBreathing/blogs/pep-and-opep-devices-improve-effectiveness-of-aerosol-medication/